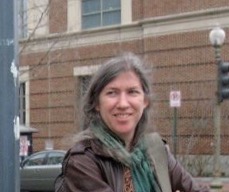 Julie was born & raised in Baltimore, MD. College and theatre work as Scenic Designer would take her throughout the U.S., from Upstate NY, to SC, DC, OK, PA, and UT.  After a decade of moving around, TheatreVirginia called her to Richmond, VA, where she has lived for 20 years.

During her first season as Charge Scenic, David Crank & Doug Huszti, Art Directors on “Hannibal,” called her to join the paint crew.  Julie became familiar with IATSE through her academic and professional theatre experiences.  She joined USA 829 while teaching full time.  To be considered for “Hannibal,” she was told “it would be necessary to join 487, which (she) gladly did.”

Julie’s film career is centered in Richmond.  As the amount of film work varies from year to year, she continues to work in the theatre or ballet as an overhire, where she “enjoy(s) working on backdrops or the occasional upholstery or costume crafts projects.”

A highlight of her career, which she describes as “most unexpected and unique” was the opportunity to go to Budapest for 12 weeks for “John Adams.”  She cites though that “each show has had unique qualities of style or production crew or location that has made each job a learning experience.” She adds that the women of Set Dec, Art Dept., Locations and the Scenics from Baltimore have been “especially helpful” as guides throughout her profession.

Julie is thrilled that she has been able to sustain a career in the Arts without moving to NY, LA, or ATL.  When she isn’t working, Julie explores the historic sites and parks that she encounters on  film locations.  She also enjoys knitting, craft sewing and “occasionally need(s) to ride a roller coaster.”

Locations where we hope to see you:

We hope to see you.

Register in advance no later than Saturday 10 December at noon to attend via Zoom.  Registration after that time will likely not be approved.

After registering, you will receive a confirmation email containing the link to attend and information about joining the meeting.

Register in advance for this meeting by clicking the link below:

After registering, you will receive a confirmation email containing information about joining the meeting.

Become a Member of Local 487

Attend our Prospective Members Meeting to get your questions answered. It is held the first Tuesday of every month at 1:00 PM via Zoom.  Contact Local 487 to receive a link to the meeting. At this … END_OF_DOCUMENT_TOKEN_TO_BE_REPLACED

We use cookies to ensure that we give you the best experience on our website. If you continue to use this site we will assume that you accept these cookies.AcceptPrivacy Policy